I had previously written a short, one-paragraph description of Purse State Park, but I feel that it is necessary for me to update that paragraph, because of how much there is to write about the park. It's my top place to go fossil hunting, as it has many qualities. 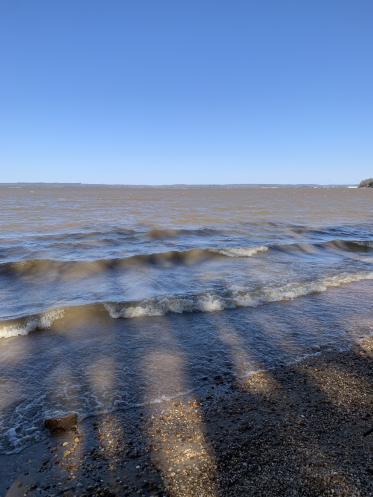 A picture I took of the beach. You can see there are a lot of little rocks and gravel along the coastline. There are usually numerous shark teeth hiding amongst them.

My friend and I drove to Purse State Park, which is in Charles County, Maryland just a few days ago. We had one goal in mind: fossil hunting! We had known that the weather wouldn't be perfect, with highs only around 50 degrees. However, that did not stop us from going. We left really early, so that we could guarantee ourselves a parking spot in the tiny parking lot next to the head of the trail. We arrived at sometime between 8 and 9, and miraculously, we were the first people there! My friend and I happily strolled to the start of the trail which led to the beach, and proceeded down it.

That was when things took a turn rather for the worse. the trail was incredibly muddy, and so we had to hug the edge of it. There was hardly a single dry spot along the whole stretch of the trail! after about ten minutes or so, we finally reached our destination. However, we quickly noticed how strong the wind was. We were both dressed appropriately for the weather, yet were still shivering in the chilly wind. My friend and I both agreed to try to stay for as long as possible before turning back. We searched vigorously, and within the first minute, he found a shark tooth! I soon unearthed one as well, and at the end of the day, he had close to 70 shark teeth (he did not keep any other fossils), and I had close to 85 shark teeth fossils and stingray fossils. 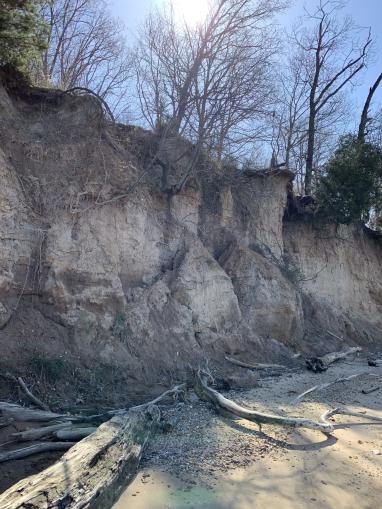 There were cliffs all along the beach

After about ten minutes or so of fossil hunting, we were both frozen. Because we had to sift in wet sand, and sometimes in the freezing water, our hands had become extremely cold, to the point that we could hardly feel them. My feet were also cold, because I had changed from sneakers to sandals upon arriving at the beach. In an effort to warm up my hands, I used socks as gloves and placed both hands in my pockets. It worked, and after that experience, we both knew better than to venture into the water again. Besides a beach, there were also cliffs, streams, and other cool things along the coastline. We did some exploration, and had tons of fun trying to cross one of those streams on a log. Although it was still cold for the first hour and a half, it warmed up around noon. By then, we started seeing more people arriving, and we decided to have lunch and get ready to leave. 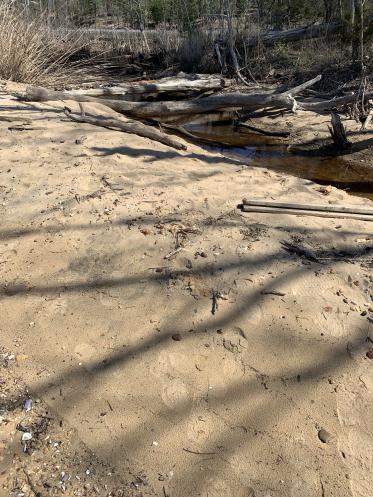 One of the streams flowing from an inland lake over to the river.

All in all, we hunted for about 3-4 hours. If you're not into fossil hunting, there are other things to do at Purse State Park, such as bird watching and hiking. There's also another spot about a five minute drive away from Purse, where you can go in the case of a lack of parking spots at the state park. One thing that I would advise anyone who wishes to go fossil hunting early in the morning or during springtime to do is to pack extra clothes and maybe even gloves, because you can bet that it'll be windy at the beach. Both my friend and myself were very proud of all the fossils we found, and we had quite an amazing time!