Pictures and articles by Chubby Squirrel

It's very likely that you have heard of the dinosaurs that once roamed our very own planet Earth. Maybe you've seen depictions of a T-Rex in movies, or at a theme park you visited. However, you probably don't have a remnant of one of these ancient creatures in your house, just lying around on the countertop, or maybe perched on a shelf.

Now, I'm not here to brag about a million dollar T-Rex skull, or maybe the spine of some long dead pterosaur. Today, I'm going to tell you about my personal experiences with fossil hunting, and show you some of the fossils that I have collected. 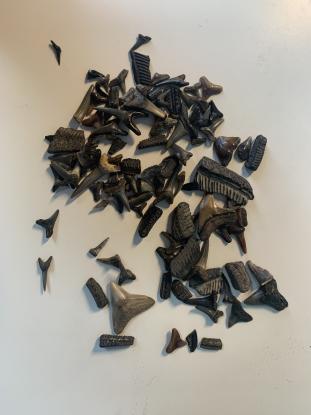 Some of the fossils I have collected

When most people think of fossils, images pop into their mind of deserts, or canyons in Utah and Wyoming. While it is true that most big dinosaur fossils exist in those areas, or are at least easier to find there, chances are that you might be able to find fossils in your area. I was born with a love for dinosaurs, and as a kid, I would spend a lot of time playing with dinosaur toys. A family friend was a paleanotologist, and she gave me a few fossils that she uncovered in Wyoming. Since then, I have always loved collecting fossils.

I don't live in an area that is close to a canyon or a desert where most dinosaur skeletons are found. I live in a temperate climate, with deciduous forests all around. There are four distinct seasons, each bringing its own share of happiness and despair to us (yay! Spring is finally here!! :D Oh wait, I forgot about the pollen D: ). All in all, doesn't sound like a great place to dig for fossils. However, I do live near an ocean. After doing some research, I found out that there were areas along the coast that housed shark teeth fossils. So I gathered up my friends, and we went for a fossil hunt.

That first time we went, we were mildly successful. Maybe six or seven teeth were found. However, it was a bit dissapointing for us. We decided to try another location. The next time, we went to a tiny sliver of a beach, if it could even be considered one. It was at the base of what could be considered miniscule cliffs, about ten feet in height. We had to descend carefully from a steep slope leading down to the beach. The beach was maybe six to ten feet in length. When the tide came in, it would shrink to a mere 5 feet or less. However, this was the best place to search for fossils because of its remoteness (we had to hike in the woods for almost a mile to get here, and there was no parking lot). Nobody came here much, and we only saw one other person on the whole beach that day. 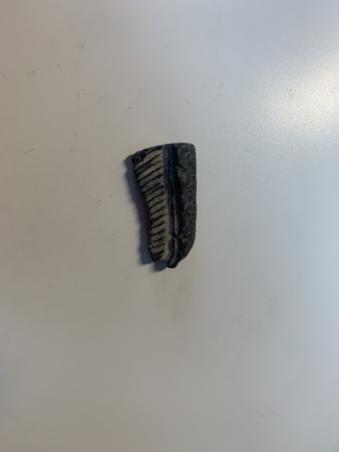 For the sake of simplicity, I'll refer to the second beach as The Cliff from now on. We took out our homemade tools to help scoop out sand and sift with. We had little luck in the first five minutes or so, but after that, the fossils came in like a fly tumbling into a pitcher plant (they came in fast). We would find at least one shark tooth each time we took out a pan-ful of sand. It wasn't only shark teeth. We also found manta ray mouth bones (I believe that's what they were, but I'm not 100% certain), and what seemed like a miniscule fossilized lobster claw. Feel free to correct me if I'm wrong. In the end, we got a total of 76 shark teeth, 21 manta bones, and 7 unidentified (lobster claw?) fossils. Not bad for a second time!

While it may be frustrating, finding fossils is a very fun activity. It requires concentration, but the happiness it brings you when you find one will make it all worth it in the end. One thing that I've learned is to always go to areas with cliffs, because you'll find way more there than in flat beaches or sand dunes. I encourage you to look for an area near you that could potentially house shark teeth, and head out with your friends. Even if you return empty-handed, the experience will be worth it. Besides, who would pass up a chance to go to the beach?