Article and All Pictures By Chubby Squirrel

I don't know if you've heard of, or, should I say, heard brood X cicadas so far this year. I had no considerable knowledge of them at all until they literally arrived at my doorstep! Brood X (the Roman numeral for 10) is a generation of cicadas that only emerge once every 17 years. When they do, it is commonly described as "One of nature's greatest spectacles". The generation that is emerging now actually started around 2004. After witnessing with my own eyes the mass emergence of these fascinating insects, I decided to do some research as to just what they are, why they only appear every 17 years, and, when they do, why in such gargantuan swarms and enormous numbers? 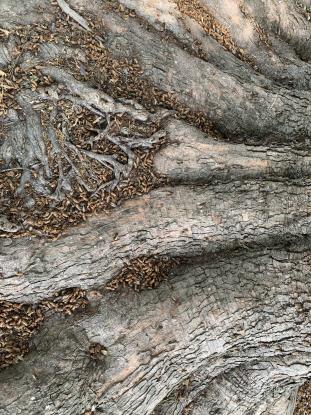 Thousands of cicadas, both dead and alive, in all stages of their transformation, under a giant oak tree.

I decided to begin by looking at the lifecycle of brood X cicadas. Its humble beginnings are on small sticks and twigs in trees. Adult cicadas that have left the relative safety of the soil and molted breed as soon as they can, and the eggs are laid on whichever tree they happen to be closest to. After about 10 weeks, the babies, or nymphs, hatch, and fall onto the ground below. They then proceed to burrow down 6-18 inches in the soil, where they will stay for 17 years, drinking sap from the roots of trees and other plants. After the said amount of time, they will emerge all at once when the soil temperature reaches 65 degrees fahrenheit. 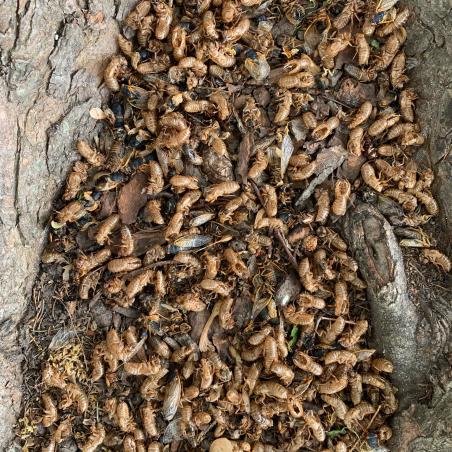 A closer look at the roots from the previous photo.

Adult cicadas all die off within 5 weeks aboveground, which is really depressing, seeing as to how they've spent the overwhelming majority of their lives living underground, and are never able to dwell in the nature above. I then wanted to find out why cicadas all emerge at once. These insects have quite a conglomeration of predators, which include birds, fishes, other insects, and even housecats, among numerous other animals. There can be more than a million cicadas per acre, which allows their predators to stuff themselves until they can't physically eat any more. The ones that emerge earlier will all get eaten, but the ones that emerge later will be able to breed in peace. This morbid method, sacraficing many so that an equal amount will be able to breed, allows these insects to reproduce and create the next generation. 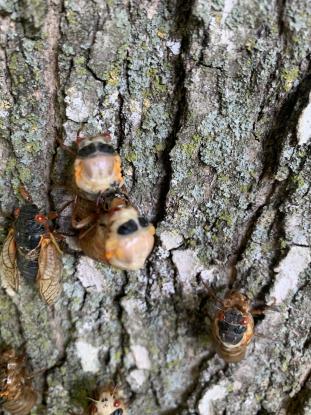 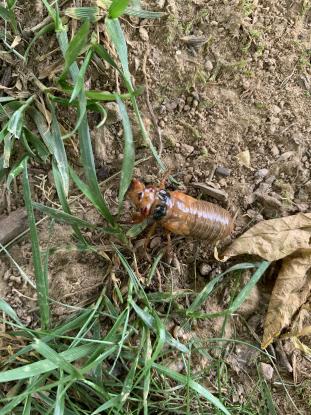 On the left, you can see many cicadas clinging to the bark of a tree. There are two in the process of molting, and a few that are already adults. In the image on the right, you can see a cicada nymph, not having, as of yet, molted.

I've heard many people ask whether or not cicadas were dangerous to humans. The answer: they're most certaintly not. I was strolling through my neighborhood the other day, and came accross the trees that you see in the photos throughout the article. When I saw some cicadas that had not yet molted on the sidewalks, I decided to help them out a bit. I grabbed them by the sides and placed them onto nearby trees so that they would be able to molt. Cicadas do not bite, provoked or otherwise. They also lack stings, and are not poisonous. However, some people do say that they may try to suck your skin if they manage to get onto you. This is because they might think you're a tree! I was actually standing beside the trees for quite a long time that day marveling at the fascinating spectacle unfolding before me, and some cicadas started climbing up my shoes and onto my legs. Cicadas have spiky, hooked feet that will feel like you're getting pinched, so I gently shook them off. Besides that, cicadas won't do you any harm. 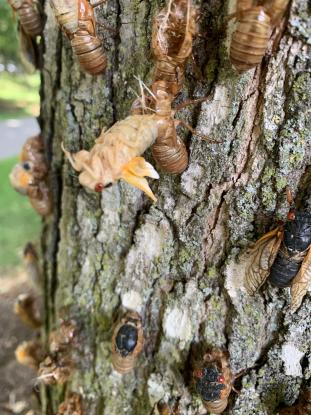 Here, you can see a cicada that has just molted, surrounded by many others of its kind. When they come out of their nymphal skins, they look white because their wings and body are still soft. They will wait until they harden before flying off.

There are many benefits of cicadas, one of which being that they provide a food source for a wide variety of animals. Though they are definitely not a reliable food source, cicadas are still able to satiate the appetites of thousands of predators when they do come out. The shells that they drop after molting make for great fertilizer, helping the very trees that they spent their whole lives under. The feature that is the most associated with cicadas is the noise that they make. Only males have the ability to make sounds, and they do so using an organ called the tymbal. They tug at it rapidly to create vibrations, which can mean many different messages. They can be as loud as a motorcycle, a low flying plane, or a lawn mower! More information can be found here! 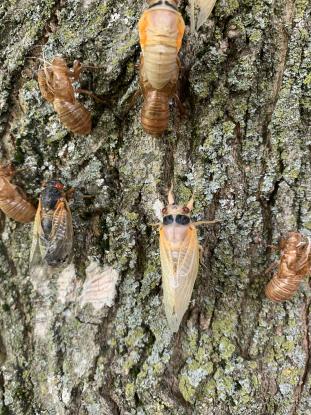 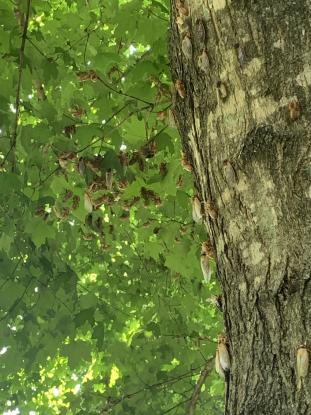 In the picture on the left, you can see many cicadas in various stages of transformation. In the image on the right, there are numerous cicadas hanging to boughs of leaves.

In summary, brood X cicadas are fascinating creatures that only see the light of day when they are born and when they die. They provide many benefits to the ecosystem, and have a very interesting way of ensuring the survival of the next generation. Although some may find cicadas annoyingly loud, I think we can all agree that cicadas are unique not only because of their long lifespan, but also because of all their distinct features.