You might have read the article on my camping trip last year to Cape Henlopen State Park in Delaware. Well, I liked it so much that I went again this year, except this time with the company of my family and my friend's family. We booked a campground for 3 days and 2 nights, but only ended up staying 2 days and 1 night! However, despite the abrupt ending, the trip was still worthwhile, and made memorable because of it. 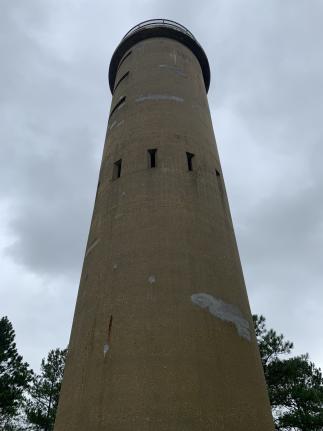 We arrived at camp on the first day at about 1:30 PM, and our friends were already there. Plenty of room was made for our tent, as although our campsite was comparatively small, it was still large enough to comfortably accomodate more than one large tent, as well as a picnic table and an area for parking. We had all brought bikes, and so we went biking around the park to explore our new home for the next 3 days. First of all, we went to one of the observation towers, which one can climb for a panoramic view of the whole park, from the ocean to the woods. Then, we proceeded towards the soldier's barracks. Cape Henlopen was actually the location of a United States World War 2 fort, built to defend the States from the German navy. There are many cannons and artillery on display alongside the barracks, and the observation towers were used by soldiers to keep watch over the coastline. Keeping to the bike trail, my friends and I rode down into the characteristic conifer woods that grew next to and upon the sand dunes near the beach. There were even some cacti nesting amongst the various shrubs and clumps of dunegrass. After biking for a while and taking in the landscape, we decided to head back and roast marshmallows, because who doesn't roast marshmallows on a camping trip? 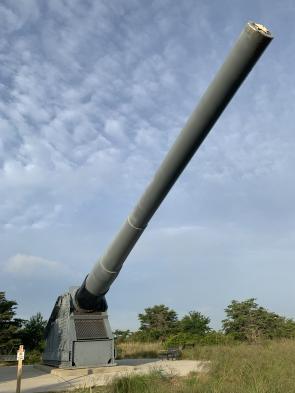 A large artillery weapon on display

Nighttime. When nocturnal predators emerge from hiding and hunt for unsuspecting victims. When ghosts are rumored to roam around. And, in the case of Cape Henlopen, nighttime is when the dreaded mosquitoes come out. There is a constant presence of flies, but the mosquitoes only come out and terrorize people in the darker hours. Because of my reluctance to apply bug repellent (I don't like the smell), I was the main target of a horde of hungry insects. That was the main downside of the whole trip, but don't let that discourage you from going camping! If you're not as stubborn as me when it comes to wearing bug repellent, you'll probably be fine. Besides, it all comes with the experience of sleeping outside, in nature. 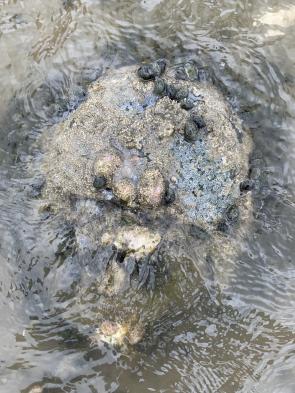 A very cool pattern formed on a horseshoe crab shell

I got up at around 5:30 on the second morning. I only slept around 5-6 hours that night, because I was unused to the air mattress and therefore was unable to fall asleep for quite some time. However, a walk in the morning air soon refreshed me. Getting up early in nature is always an invigorating experience. The birds are chirping, the sun is just starting to peek out over the horizon, and the air is fresh and still. 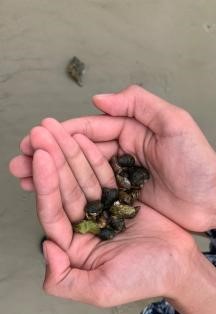 A lot of tiny hermit crabs that we found along the way. They were all over the place!

In a few hours, everyone was up, and we had broken fast and were preparing to bike over to Delaware Bay. The ride only took about 15 minutes or so, and we were able to find places to which we could lock our bikes. The tide was ebbing by the time we arrived, and so there were many islands that popped up throughout the whole bay. We traversed the now even shallower bay, wading through water less than knee-height, going from island to island. Along the way, we found an amazing variety of animals of all shapes and sizes. Among them were hermit crabs, whelks, blue crabs, ghost crabs, and horseshoe crabs. Although the bay does not offer the same experience as the ocean, it makes up for it by offering a different experience altogether that is comparable at least to that of the ocean. 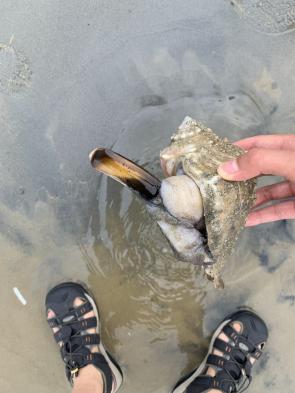 After spending the whole morning at the bay, we headed back to camp to eat lunch. Then, we played some of our favorite board games. After we had all rested in the shade for a while, we decided to head to the Atlantic Ocean. The water was absolutely freezing that day, and the overcast sky did not allow for a single ray of sun to peek through and warm us. Regardless, I jumped into the water, not bothering to get acclimated, and had some fun bobbing up and down on the waves (and occasionally getting completely bowled over by large waves. At the end, I was shivering, ready to head back to camp and warm up next to the campfire.

That night, after we had all showered, eaten diner, and roasted marshmallows, we were preparing to play some card games. Suddenly, our neighbor interrupted us, telling us of an incoming storm. We had known that there would be a storm the next day, which we didn't mind, since we'd be packing up and leaving in the morning. However, our neighbor showed us a map on her phone, which indicated the imminent arrival of two storms. The first would miss us, but the second, bigger storm had quite a chance of hitting us. We decided then that we ought to break camp and drive back home, drawing our trip to a close. It was difficult work packing up the tents and equipment at night, but we managed to get everything stuffed in the car within 40 minutes, and were swiftly on the road. After a bit of driving, we encountered the storm and drove right through it. In the end, we learned that the storm never actually hit the campgrouds. Overall, it was a fun trip, and I'd encourage anyone living on the U.S. east coast to also pay Cape Henlopen a visit!