If you like mountains, oceans, caves, or rivers, Taroko Gorge National Park in Hualien, Taiwan, is definitely a place that you'll want to visit. The national park's namesake was created by the flowing waters of the Liwu river. Today, the waters are still flowing, clear and strong as ever. 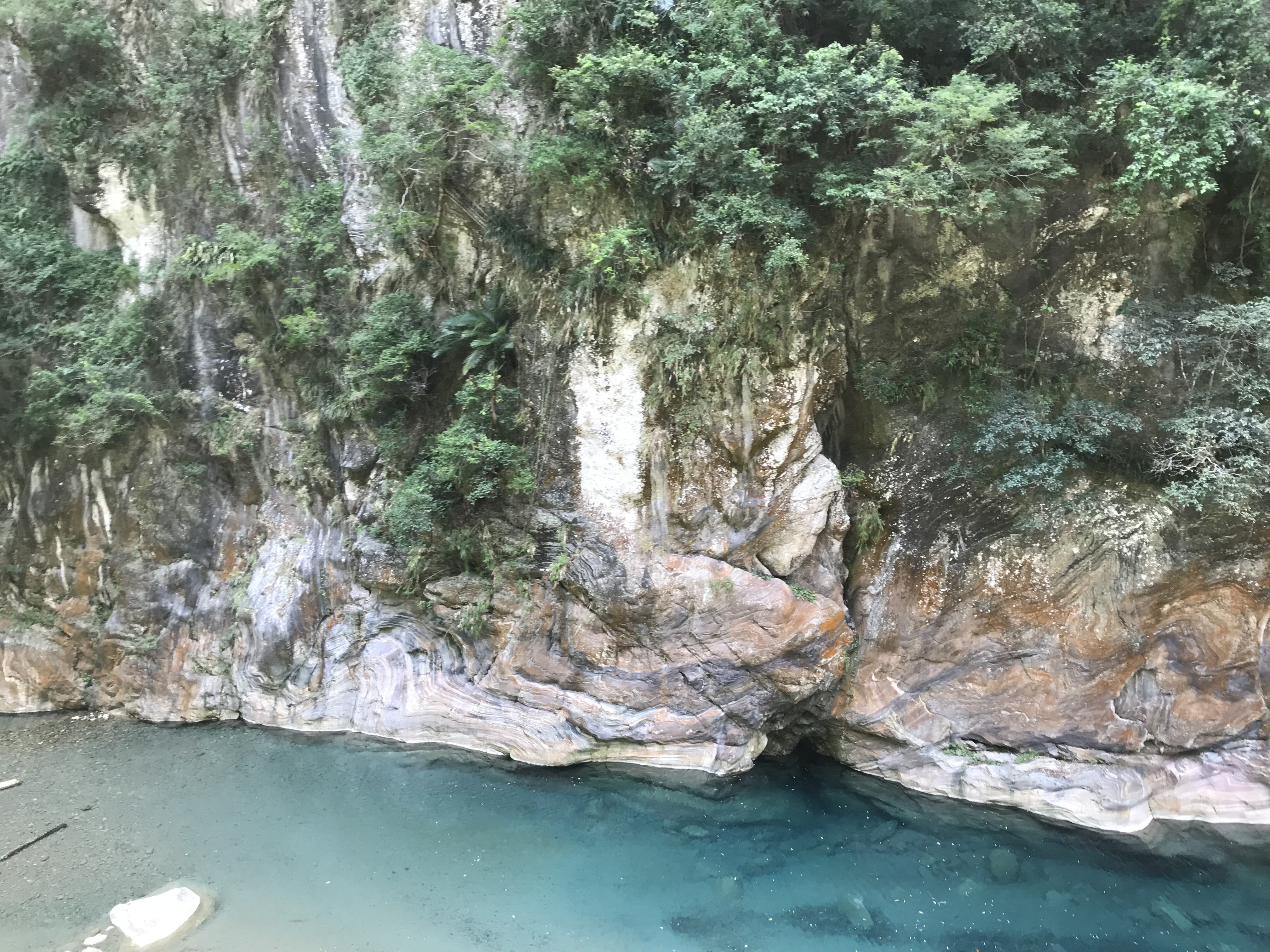 My fellow squirrel friends and I decided to give it a try last summer, so that's exactly what we did! We stayed in a hotel about ten minutes from the national park, high up on the mountains. The actual drive up to the hotel got me extremely carsick. However, the view was amazing! Because of jet lag, it was hard for us to sleep the first night, and when we did manage to fall asleep, it was only for a few hours. Myself and one of my companions woke up at the same time, around 5:30 AM. Since there was nothing to do, and we didn't want to wake the others, we decided to go on one of the hiking trails right behind the hotel. If you happened to be observing that trail head, you would have seen the two of us, climbing the wooden staircase set into the side of a steep mountain, and then you would see us, not five minutes later, sprinting right back out, faces filled with fear and excitement.

What was it, you may be wondering, that made two grown squirrels run out of the dense jungle in fear? Well, let me tell you the story, starting from the beginning. As we were climbing up that wooden staircase, we saw an abandoned shack made of a metal of some sort. It looked really old and dirty, and there was debris in the form of bricks laying around the house. Right after we passed the said house, we heard a "bang!". My companion and I turned around to see what was going on. Nothing was different from how we last saw it, so we turned back around and kept walking. It wasn't half a minute before we heard another loud "bang". This time, we noticed that there was a lone monkey that had leapt onto the aluminum roof of the abandoned shack. It was looking straight at us. That was when we remembered the signs near the entrance of one of the trails that we had passed, exploring the national park. 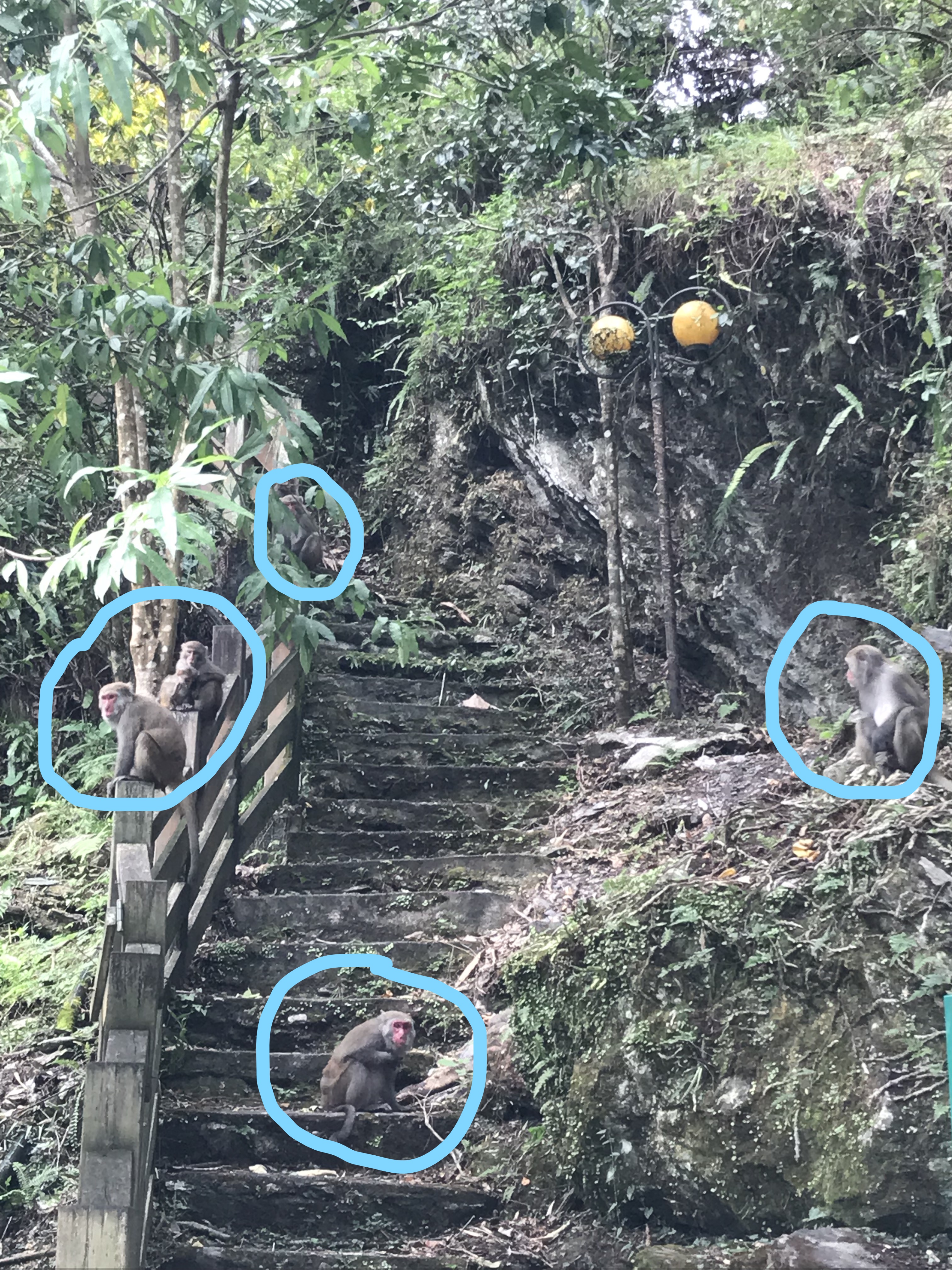 Later, as we were leaving the hotel, the monkeys were still at the trail head, looking at people coming and going.

The sign warned of wild monkeys that were aggressive and could spread gonorrhea. You could imagine how scared we were just then, staring at the lone monkey on the roof of the shack, with at least six more suddenly emerging out of the foliage, surrounding us in a tight circle with a radius of five feet, my friend and I in the center. There was only one way we could escape now. I picked up a large stick, banged it on the ground, and my friend held his water bottle up in such a way that made him appear very threatening. The monkeys, startled by our immense display of power, backed up a bit. That was enough. The two of us made a run for it, all the way down those wooden stairs from which we came, back through the parking lot of the hotel, and into our room. The rest of our group had woken up already and were wondering about our absence. We told them the story, and they decided to go out onto the balcony and try to see if they could spot the group of monkeys.

Now, this is the part that most people think is impossible. However, I can assure you that all that is said in this article is true (except for the fact that I'm a squirrel, which may or may not be false). So, with all that said, here's what happened. My friend and I went back into our hotel room, which was on the opposite side of the building from the parking lot. We went on the balcony, which was NOT facing the parking lot where the trail was. We were so surprised to see the monkeys looking up at us from the riverbank that the balcony was facing, that we were all frozen for a couple of seconds. Somehow, this pack of monkeys had managed to locate our hotel room, which was opposite the hiking trail, and were now staring up at us (we were on the second floor). Then, something even more extraordinary happened. They started to climb up the side of the building via the drainage pipes hugging the side of the hotel room. Once they were on the level of the second floor, they started jumping from balcony to balcony, getting closer to us each time. We decided that it might not be a good idea to stay there gawking, so we went into the hotel room, shut the door, and didn't open it for another hour.

Here's something that I later learned: there were two rival monkey families. One was aggressive, the other was shy and wouldn't bother visitors. Guess luck was just not on our side that day. Regardless, don't let monkeys scare you away from going to Taroko National Park! Although monkeys are a bit intimidating, all you have to do is show you're not afraid. Once you've done that, they will, most of the time, leave you alone. Obviously, the monkey "attack" wasn't the only part of our trip. That first evening, we went hiking at Bai Yang Trail. This is a trail that winds along the sides of mountains. On one side is rock that goes up really high, and on the other is a river. Obviously, you can't actually get down to the river because there's a barrier and the fact that you would have to go down 20 feet of steep, rocky terrain. You will soon discover that, by staying on the trail, you will find many more natural wonders than you would have by going down into the river.